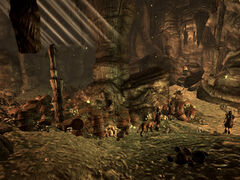 “I know those Legion bastards are tough but my friends won't last long with all the radiation in there.”— Private Renolds on Techatticup Mine

Techatticup Mine is a location in the Mojave Wasteland 2281. It is located southeast of Nelson. Several Legion troops occupy the interior with two captured NCR troopers.

Following the Great War, mining operations and visits from tourists have long stopped, and evidence of the mine's use as a storage location for barrels full of radioactive debris can be found. Two centuries later, the long-abandoned mine is used by the Legion under Decanus Alexus to hold captured NCR troopers.[1]

The mine is located at the turnaround point on the road past Nelson and was used as a dumping ground or storage area for nuclear waste. There is a hollowed-out rock directly to the right of the mine's entrance. The rock is marked with two white rectangles. After a short winding path from the entrance, there is a small chamber containing Legion troops, and paths leading left and right.

The left path leads down to a large, irradiated chamber with a group of eight Legion members including their leader Alexus, who holds the key to the storage areas down the righthand path containing NCR prisoners. The chamber centers around a large concentration of irradiated barrels and over a dozen skeletons lying among the waste.

Farther down the path, there are two Average locked gates with various weapons and armor within. Taking the righthand side path leads to a small chamber with four Legion troops and two locked storage areas, each containing a tied-up NCR soldier and some loot.

Techatticup Mine appears only in Fallout: New Vegas.

Radioactive waste barrels in a cart

Second cavern inside the mine

Close up of the skeletons