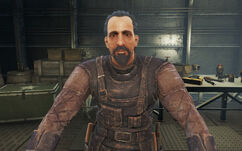 Quartermaster
Proctor for the Order of the Sword

Tour of Duty
Feeding the Troops

Proctor Teagan, registration TG-477PR,[1] is the Brotherhood of Steel's quartermaster and the proctor for the Order of the Sword, living on the Prydwen in 2287.

Proctor Teagan is the quartermaster on the Prydwen. He is in charge of managing the Brotherhood's equipment and munitions and cataloging weapons and armor recovered by Proctor Quinlan's research patrols out in the field. As the Brotherhood's proctor for the Order of the Sword, Teagan's scribes are responsible for designing and manufacturing the weapons used by the military. He is also the man responsible for engineering Maxson's battlecoat.

He sells a variety of gear to the discerning customer, as long as they are a member of the Brotherhood of Steel. However, he keeps the best gear reserved for higher-ranking members, which the Sole Survivor will be able to purchase as they rise through the ranks of the Brotherhood. The proctor also manages the Brotherhood's food supply, which is used by the airship's mess officer to cook the meals eaten by the soldiers and has officially requested the chain of command to lend aid so that the Brotherhood can get better prices from traders. The player character can go and help him with an unofficial operation to gather food for the Brotherhood by securing a supply of crops from a settlement in the Commonwealth.

Proctor Teagan appears only in Fallout 4.

Retrieved from "https://fallout.fandom.com/wiki/Teagan?oldid=3457146"
Community content is available under CC-BY-SA unless otherwise noted.