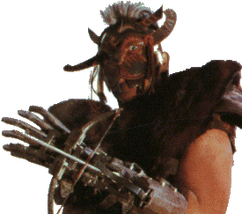 Player earns Klik's trust and she will trade
Medium XP

Teach the Scaven-pickers to make their own Rad-X was going to be a quest in Van Buren, the canceled Fallout 3 by Black Isle Studios. It is located at the Reservation.

If the player has established communication with Klik, and has the Pharmacist perk, he can offer to teach Klik how to make her own version of Rad-X using ingredients from the Reservation region and a science kit. Of course the player would have to give a science kit to Klik. Another main ingredient is cockroach guts.

Retrieved from "https://fallout.fandom.com/wiki/Teach_the_Scaven-pickers_to_make_their_own_Rad-X?oldid=2810688"
Community content is available under CC-BY-SA unless otherwise noted.