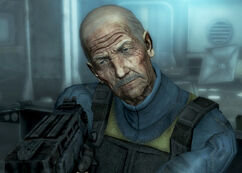 “Don't you know enough to stay away?!”

Officer Taylor is a senior member of the Vault 101 security team. After his beloved wife's death, he blames the reckless escapees for the stress it caused her.[1]

Trouble on the Homefront: Taylor is the second security guard the Lone Wander encounters when reentering the vault. Although he blames the Lone Wanderer and James for the problems in Vault 101, he is not hostile.

Officer Taylor appears only in Fallout 3.

Officer Taylor
Add a photo to this gallery

Retrieved from "https://fallout.fandom.com/wiki/Taylor_(Vault_101)?oldid=3224484"
Community content is available under CC-BY-SA unless otherwise noted.