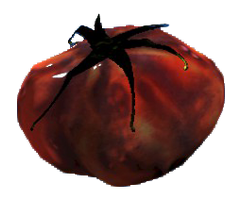 “According to some old botany texts we found, this appears to be combination of a now extinct plant called a "potato" and another extinct plant called a "tomato." The outside looks like a tomato, but the inside is brown. Tastes as absolutely disgusting as it looks, but will keep you from starving.”— Senior Scribe Neriah, Botany terminal - The Prydwen

Tato is a consumable item in Fallout 76.

Tatos are a mutated hybrid of the tomato and potato plants. The 'fruit' of the plant has the skin and stem of a tomato, and a brown flesh reminiscent of a potato. Commonly cultivated in the Commonwealth, Appalachia and the Island, its fruit is notable for being nutritious and easy to grow,[1] though its taste leaves something to be desired.[2]

The player character can plant and harvest tatos as a food and component source.

Tatos can be harvested and planted using fertilizer. It is a component of vegetable starch, which in turn can be scrapped into adhesive. It is also an ingredient in several recipes.

Retrieved from "https://fallout.fandom.com/wiki/Tato_(Fallout_76)?oldid=3333796"
Community content is available under CC-BY-SA unless otherwise noted.