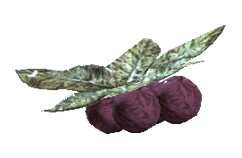 Tarberry is a consumable item in Fallout 4.

Tarberries are small, purple berries of the tarberry plant, itself a water-grown crop ostensibly similar to cranberries. It is used in the Lock Joint syringe, the Berry Mentats, mirelurk jerky and in Fancy Lads Snack Cakes.

Tarberries are a required component of Berry Mentats, which give a substantial +5 boost to Intelligence and thus earned experience. Under normal circumstances, this works out to about a 16.666% bonus. This is likely the reason that tarberries are one of the rarer crops in the Commonwealth.

Tarberries can only be farmed at the Slog. A swimming pool containing nine farmed tarberry plants, which can normally be harvested once a day. The player character is not required to have the Slog as a settlement to harvest the berries, but the settlers must be alive. Additionally if one does control the settlement, settlers must be assigned to farm them like typical crops.

Tarberries cannot be planted, and can only be found growing in ponds, swimming pools, and on any surface of still water. General goods vendors (i.e. Myrna and Trashcan Carla) occasionally carry up to three tarberries for sale.

Retrieved from "https://fallout.fandom.com/wiki/Tarberry_(Fallout_4)?oldid=3416085"
Community content is available under CC-BY-SA unless otherwise noted.