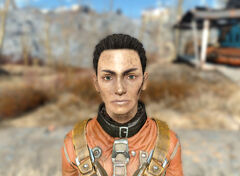 “Knight Astlin. She was in my company, years ago. Best marksman I ever saw.”— Paladin Danse

Astlin and her colleagues were members of the Brotherhood of Steel's Recon Squad Artemis, the second of three squads deployed to The Commonwealth to look for new technology. Shortly after arriving in the region, the team was attacked by unknown assailants and four of its knights were killed, leaving only Astlin, Scribe Faris and their leader, Paladin Brandis, alive. The three retreated to the nearby National Guard training yard. Some time later, Brandis and Faris left to go to the Revere satellite array, leaving Astlin to secure the training yard. It was during this time that the location was overrun by feral ghouls. She barricaded herself within the recruitment center and activated her distress beacon, but after three hours nobody responded and the ghouls broke in and killed her.

Should Paladin Danse be present when the Sole Survivor finds Astlin's corpse, he will reveal that she was in his squad years ago and that she was the best marksman he'd ever seen.

Tara Astlin appears only in Fallout 4.

Retrieved from "https://fallout.fandom.com/wiki/Tara_Astlin?oldid=3261375"
Community content is available under CC-BY-SA unless otherwise noted.