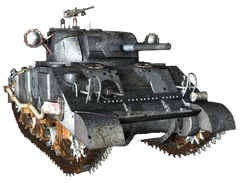 The tank is a drivable vehicle in Fallout Tactics.

The tank is a pre-War combat vehicle which has been heavily modified over the years. Unlike other Fallout Tactics vehicles it possesses a weapon, a tank gun, which deals 50 to 120 damage with a range of 50. There is a Brotherhood of Steel insignia on its side.

The tank was found abandoned near the Reaver Movement HQ in Newton by a Brotherhood of Steel squad, led by the Warrior, who came and repaired it, placing it under their control.

A coding error causes shots with this weapon to be attributed to the driver, not the gunner. This is cosmetic; the gunner's Big Guns skill is correctly used for to-hit calculations, not the driver's.

Pre-War tanks seen in the introduction of Fallout Tactics: Brotherhood of Steel

Tank moving away from a pacification bot in Fallout Tactics