A tank is a large armored vehicle found throughout the wasteland.

The Chimera is a co-opted mining rig that has been weaponized and armored by the Chinese to serve on the Alaskan front.[1] Described as bigger and tougher than any tank in the American arsenal, the Chimera was fitted with multiple long range weapons and armor.[1]

This type of heavy duty tank was utilized by the United States Armed Forces before the Great War. What remains of these tanks can still be found throughout the Commonwealth and Appalachia.

The tank is a pre-War combat vehicle that has been heavily modified over the years. Unlike other Fallout Tactics vehicles it possesses a weapon, a tank gun, which deals 50 to 120 damage with a range of 50. There is a Brotherhood of Steel insignia on its side. 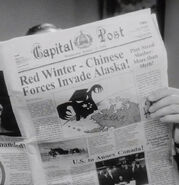 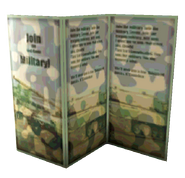 Military school brochure with an illustration of a tank