Daughter of Aradesh
President of NCR

“I used to envy 'em that. I wanted a life of adventure, but I stayed here and took over as mayor when my dad died. Been running this place and building NCR ever since. Guess it turned out to be a pretty big life after all.”— Tandi in 2241

De facto president-for-life Tandi (born in 2145) is the leader of Shady Sands. In 2161, she still resides in the same town, unaware of her future role in society. Destined to be a founder and second president of the New California Republic, she would go on to become one of the most influential people in the entire post-war world.

She is the daughter of Aradesh, and is destined to one day replace her father as the town's leader. Currently, she is bored stiff with the place, a little in awe of people who've seen something of the outside world, and a bit naïve. She's a tomboy with a sharp mind and quick wit, a free spirit who is not afraid to speak her mind.[1]

Tandi was one of the most important people of the West Coast in the 23rd century. From her early years displayed an uncommon strength of character and liveliness, complementing her good looks (six feet tall with raven black hair and a dark complexion). In 2161, at the age of sixteen, she met the Vault Dweller, a figure who would inspire her for years to come with their charisma and skill, exemplified by ridding Shady Sands of the radscorpion plague. The impression was only reinforced when Tandi was kidnapped by the Khans during their raid and the Vault Dweller rescued her from the raiders.

Tandi helped her father expand Shady Sands, laying the foundations for the New California Republic. When her father disappeared searching for Vault 13, she rose to power, and soon the town grew substantially as she opened trade routes with Junktown and the Hub. This was something her father had been reluctant to do, despite the obvious advantages. With a strong economy and Tandi's determined guidance, Shady Sands soon dominated the brahmin trade and eventually, the first states of the NCR emerged, slowly merging into a standalone political entity with help from the Brotherhood of Steel, which remained out of the power structure for the time being.

Tandi succeeded her father as the President of the Republic and from then on ruled the NCR alongside the Congress. She was focused on expanding the state, to bring peace and stability to the wastes. Her ideals long since replaced by pragmatism, she was not above forging a deal with New Reno to bully Vault City into joining the NCR and supplying it with their superior medical technology. Closing on 100 years of age in 2241, Tandi remained acting President, still retaining her wit and youthful fire. Dementia and other ailments of the elderly seemingly failed to sink their hooks in her.

President Tandi died in 2248 at the age of 103, after a 52-year presidency. She was succeeded by her Vice-President, Joanna Tibbett.[2] Her legacy lived on, however, and she remains the most popular NCR president to date.

Tandi's father is Aradesh, the leader of Shady Sands. Her mother's name is unknown. Seth describes her as 'my girl' before correcting himself in her rescue quest showing him to be a former love interest. She had a son, Hoss, although she wasn't particularly proud of him.

In Fallout 2, Tandi's purpose is to give the quest to make a deal with the squatters of Vault 15. She also gives a huge amount of background information about the Vault Dweller, for those who have not played Fallout.

A younger version of her also makes an appearance at the Café of Broken Dreams special encounter.

"Oh, aren't we the sarcastic one? Are you going to get me out, or what!?"
Add an image to this gallery

"Lord, that was a long time ago! Hardly remember who I was then - just a naive girl. The one you call the Vault Dweller - is he still alive?"

Tandi appears in Fallout as a talking head voiced by Cree Summer and in Fallout 2 where she is voiced by Tress MacNeille, appearing much older. She is also mentioned in Fallout: New Vegas and can be seen on the $100 NCR bill.

In-game Tandi in the original Fallout. 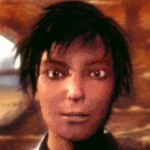 Young Tandi's headshot
Add an image to this gallery

In-game Tandi in Fallout 2.
Add an image to this gallery

Retrieved from "https://fallout.fandom.com/wiki/Tandi?oldid=2512763"
Community content is available under CC-BY-SA unless otherwise noted.