00000063 (Fallout)
00000144 (Fallout 2)
“I used to envy 'em that. I wanted a life of adventure, but I stayed here and took over as mayor when my dad died. Been running this place and building NCR ever since. Guess it turned out to be a pretty big life after all.”— Tandi

Tandi is the daughter of Aradesh, the leader of Shady Sands. She served as the second president of the New California Republic.

Tandi met the Vault Dweller when they helped to rescue her from the Khans, which subsequently kept her community safe.[1] Seth and Tandi were close during her time living in Shady Sands, with Seth describing her as "my girl" during the rescue quest but Tandi sharing that Seth isn't her type.[2][3] Karl refers to Tandi as "Mrs. Tandi"[4] and she has a son named Hoss.[5]

Aradesh and Tandi oversaw Shady Sands as it grew, eventually becoming the capital of the New California Republic.[6] She served as president for 52 years, taking office after her father.[7] She was popular with the people, chosen by the representatives of the Hall of Congress council unanimously for each term.[7]

"Lord, that was a long time ago! Hardly remember who I was then - just a naive girl. The one you call the Vault Dweller - is he still alive?"

Tandi in the Cafe of Broken Dreams 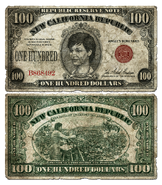 President Tandi on the $100 NCR bill in Fallout: New Vegas