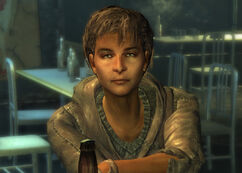 “Yeah. That's James. My own little trouble making brat. I'd sell him to you if they'd let me.”

Tammy Hargrave is an alcoholic resident of Rivet City in 2277.

Tammy is a middle-aged woman who drinks too much and generally represents poor parenting. She is the mother of James Hargrave. She claims to have married James' father out of sheer desperation, and when he died at the hands of raiders, she was left with his "brat" son. She took James to Rivet City. Tammy considers herself better than most of Rivet City's citizens. Ironically, Tammy spends her days getting drunk in The Muddy Rudder surrounded by riff-raff and often doesn't return home for days at a time. She never knows where James is, because she simply doesn't seem to care.

Tammy can be heard talking in her sleep, mentioning Megaton. She mentions that her husband left her and her son to go out on his own. If the Lone Wanderer asks other residents why Tammy's son is such a brat, most residents will tell them that Tammy is an abusive mother.

She can be found in the common bedroom area on the midship deck, in The Muddy Rudder, or occasionally the marketplace.

Tammy Hargrave appears only in Fallout 3.

Retrieved from "https://fallout.fandom.com/wiki/Tammy_Hargrave?oldid=3364243"
Community content is available under CC-BY-SA unless otherwise noted.