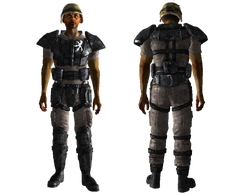 The Talon combat armor is the combat armor issued to all of the mercenaries who work for Talon Company. The matching Talon combat helmet is a unique helmet that can only be found on Commander Jabsco, the group's local commander in the Capital Wasteland, who resides in Fort Bannister.

This armor and helmet are black colored variations of the traditional combat armor. The suit bears the Talon Company logo in white on the left breast.

There are unique versions of both armor and helmet in the game files, with different base IDs and better stats. The unique variants have higher Damage Resistance and durability, but can only be obtained by using console commands.