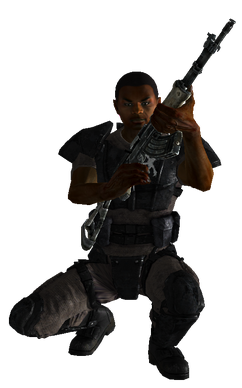 “I want this one's head on a fucking plate!”

Talon Company mercenaries are members of the Talon Company, a mercenary company operating in the Capital Wasteland in 2277.

After reaching a Karma status of good or higher, a 1000 cap bounty will be placed on the Lone Wanderer's head, and Talon Company mercs holding a private contract will periodically attempt to collect. Talon Company search parties operate in squads of different sizes dependent on the Wanderer's level.

Three Dog mentions that Talon Company mercs accept jobs that other mercenary companies would not do. Reilly of Reilly's Rangers notes her particular dislike of the Talon Company, recalling a job they did which involved the killing of defenseless "women, children... everyone" and commenting that they give all mercenaries a bad name. If the player character converses with her rudely, she will mention that they sound like a Talon Company merc.

Fort Bannister acts as their main base of operations in the Capital Wasteland, seeing that it is exclusively populated by Talon mercenaries and contains an even larger underground base crawling with more high level mercs. Bannister is also where the Lone Wanderer will find the Talon's commander.

They can also be found fighting super mutants at the Capitol building.

There are several random encounters in which the Lone Wanderer can encounter a group of Talon Company mercs.

The Broken Steel add-on adds a fourth rank of Talon Company merc, with higher health and better armor, that appears at higher levels. Even at level 30, Rank 4 Talon Company mercs are a relatively uncommon encounter. They are typically found in random encounters, rather than in fixed locations such as Fort Bannister. They are quite tough opponents, with good armor and very high health (more than twice that found on a rank 3) on par with that of a non-player character companion.

Whenever the Lone Wanderer's Karma is at least Good, these mercs will appear in random encounters and first converse before attacking on sight.

Talon Company mercs appear only in Fallout 3 and are mentioned in the wasteland journal in Fallout Shelter.

Add an image to this gallery
Retrieved from "https://fallout.fandom.com/wiki/Talon_Company_merc?oldid=3217163"
Community content is available under CC-BY-SA unless otherwise noted.