Fallout 3
“Some fellas came by here a while ago that said they was lookin' for some dogooder that came from out of one of them Vaults. I told 'em I ain't seen nobody like that and set 'em on their way. They might still be around here though, if'n you think you can help 'em.”— Grandma Sparkle

The Talon Company camp is an unmarked location in the Capital Wasteland in 2277.

The building functions as a forward operating base for three Talon Company mercenaries. It is located in an office building a short distance to the southwest of the sewer waystation (across the arterial road and up the hill), a bit west-northwest of Grayditch. The building is recognizable by a metal stairway on the east side of the building, usually with a number of corpses dumped just underneath.

Once inside the building, a narrow hallway (which can form something of a choke point for an unauthorized intruder like the player character) leads to a common room, from which two other rooms lead off: a storeroom and a control room/dormitory. There is a Talon Company merc in each room. The rest of the building is inaccessible due to passageways being blocked by collapsed ceilings. Minor amounts of random loot can be found in several of the containers.

The Talon Company camp appears only in Fallout 3. 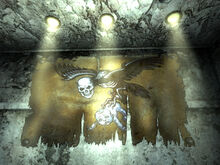 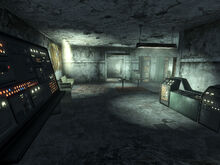