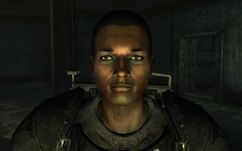 The Talon Company bosses (named Talon Company mercs in-game) are four hostile NPCs; one located on top of the SatCom Array NW-05a and three inside Fort Bannister, in 2277.

According to the ghoul scientist's terminal, the SatCom boss and the rest of the Talon Company mercs were hired to protect her as she works to utilize the United States' nuclear arsenal from within the building.

The Talon Company boss appears only in Fallout 3.

Retrieved from "https://fallout.fandom.com/wiki/Talon_Company_boss?oldid=3151868"
Community content is available under CC-BY-SA unless otherwise noted.