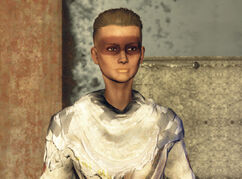 Tally Lang is a member of the Raiders in Appalachia in 2103. She is visiting Fort Atlas under the guise of a civilian looking to acquire guns for self-defense, when in reality, she is trying to build up her Raider gang.

Ostensibly, Tally Lang is a poor, innocent wastelander who has visited Fort Atlas to acquire guns from the recently-arrived Brotherhood First Expeditionary Force, so that she and her friends can properly defend themselves from the dangers of Appalachia.[1] In reality, she is a member of the Raiders from the Crater, seeking to get ahold of the Brotherhood's arsenal to make her gang more powerful.[2]

Forging Trust: Tally is one of four civilians inside Fort Atlas, each with their own problems and requests for the Brotherhood of Steel. Knight Shin asks that the player character interview these civilians, though ultimately Shin discards Tally's request. Shin vehemently denies the prospect of giving valuable weaponry to a wasteland civilian, and this can be reinforced with the suspicion that she may be a raider.

Tally constantly denies that she is a raider when asked, although Knight Shin has his own suspicions about her. If the player character had sided with the Crater Raiders in order to access Vault 79, they can affirm to Tally that they are friends with Crater, upon which she will quickly tell the player character to keep quiet about her association with the Raiders.[2]

Tally Lang appears only in Fallout 76, introduced in the Steel Dawn update.

When Tally tells a Crater-allied player character to stop mentioning the Raiders, she will tell them to "ix-nay on the Ater-Cray!" This is Pig Latin, with "ix-nay" in particular being a phrase that has entered common informal usage in English.

Retrieved from "https://fallout.fandom.com/wiki/Tally_Lang?oldid=3429605"
Community content is available under CC-BY-SA unless otherwise noted.