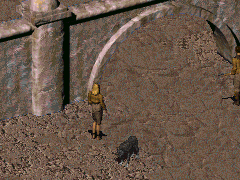 “You are standing in Shady Sands. We are but a small town in a large world. We just want to be left alone.”— Katrina

Talk to Katrina is an unmarked quest in Fallout.

Katrina is the town greeter standing at the front entrance to Shady Sands. The likely intention of the developers of Fallout was to include her as a tutorial character, considering her dialogue is focused around explaining a few fundamental game-play systems, including bartering, healing, and the First Aid and Doctor skills.

This quest is very straightforward, and exhausting all possible dialogue options with Katrina will yield an XP reward. Make sure to put weapons away as she will not talk to a player character armed with any weapon since she encourages peace and diplomacy in the small community.

Retrieved from "https://fallout.fandom.com/wiki/Talk_to_Katrina?oldid=3224021"
Community content is available under CC-BY-SA unless otherwise noted.