Hi. I've seen the Fallout-Boy somewhere else ... i think it was a RPGish game where you trained some unlikely (unlikely indeed) Super-Heroes in a partly flooded city. Though i can't remember what the name was or who's the publisher. --unpaid lamer

If he appeared in a game, it must have been published by Interplay, although none of the ones I know fit the description. Ausir 16:48, 10 February 2009 (UTC)

That was my guess, too. Though i couldn't find any hints in that direction. --unpaid lamer 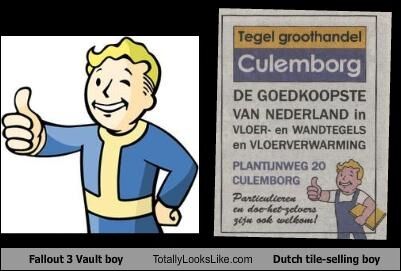 I can't figure out the proper formatting for the change I just made. Help?

The Vault Boy images are so freaking cool. I think there should be a gallery on the main page with all of them. All of the one's from the perks etc. I know it's a big undertaking, but the Vault-Boy pics are epic. I mean look at the Pip-Boy pick that goes with Lincoln's Repeater!! Why are these pics not on this wiki!!??? (I'd do it myself but I only have 360 version)...V.A.T.S. addict 01:39, April 9, 2010 (UTC)

I agree, Vault Boy is as important to fallout like the 10 mm pistol, i mean it's technically the face of all and any fallout games existing and to come, but it looks like nobody cares :(, he even could replace this UGLY background the wiki has,

He looks a lot like the male characters on Number Twelve Looks Just Like You which is an episode of the The Twilight Zone. The Episode is about a future where everyone undergoes a transformation to look beautiful so it's unrelated to the Post-Apocalyptic world of Fallout, but they look exactly alike almost with the swoosh hair thing and the way the sideburns are trimmed.--Skipbomber 02:55, April 20, 2011 (UTC)

Do you think it's worth mentioning the Vault Boy's female counterpart. I'm not sure if she has an official name, but "Vault Girl" would be accurate. Anyway, Vault Girl has appeared in many Fallout Perks and traits, such as, Empathy, Black Widow, and Action Girl. In fact, most of images that don't contain the Vault Boy, contain the Vault Girl instead (like Action Girl, or Cherchez La Femme). Do you think we should mention her in the Vault boy's page, or should the Vault girl recive her own page? I seem to have just embarrased myself by not reliseing the Vault Boy's female counterpart already had a page. I must have missed when they added it.--KayO199X 21:11, July 29, 2011 (UTC)

Anyone else bothered by how poorly drawn Vault Boy is in Fallout 3? It's especially glaring when paired with the quality of the unique icons in New Vegas. Sometimes, when I have the Skills window open, I catch myself going back-and-forth between Survival and the other skill icons and just cringing.
Punchbattle 08:06, June 25, 2012 (UTC)