I'm not sure if my XBox was being weird or if it's a bug, but the flare gun claims to have 10 rounds loaded in as opposed to 1 (like, say, Thump Thump), despite reloading after every shot. That number never seems to go down. Tyrasis 04:44, September 22, 2011 (UTC)

Happens on PC, so is a bug.

Definitely not a bug from how it sounds, uses 10 flamer fuel in one shot. Though that is a bit ridiculous, there are several weapons that use more than one charge per shot - Plasma defender uses two SEC for example.

Anyway, when it says that the flare gun scares off Abominations...does that mean ANYTHING that fits into the abominable challenge? Though it's impossible, I'd LOVE to see Ghost People run scared.

What would happen if you fired this thing at House the flesh one after all he is an abomination. Fryingpan57 23:51, October 8, 2011 (UTC)

This page has pretty much the same problem as the Flash bang weapon - needs to be filled out. How much AP does it use, its spread, its critical damage, its critical chance, all that stuff. I'd do it myself if I knew how to, or if I had access to the game. Fall Break, come sooooooon!--FAR-02C 19:53, September 25, 2011 (UTC)

Is the fire damage that the abominations take from this weapon affected by the perks that affect fire based weapons? Gary 42 01:42, October 2, 2011 (UTC) 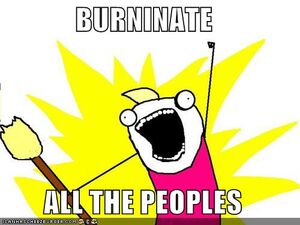 Viewing the model right now in the GECK, right above the trigger it says:

Upon googling this, it came up with this: http://www.liveauctioneers.com/item/7494384

This weapon saved my behind so many times, especially in the divide, with all it's Deathclaws... I might carry it around with me all the time now.

I would argue that the fact that the reload animation is shared with another gun is not really notable. Numerous assets are shared between FNV and FO3. Additionally, numerous reload animations within FNV are shared with multiple weapons. However in the hopes of not furthering an edit war I feel that it should all be discussed here. Richie9999 (talk) 17:55, June 30, 2013 (UTC)

If I may chip in after our discussion in chat over this. I mostly thought that listing the animations wouldn't really improve the quality of our pages... obviously I can't speak for every person that comes here but would listing this really prove to be a help for people? Because that's what we write our pages for, is it not? Yes of course we are also an encyclopaedia but I struggle to see how listing what animation a weapon uses will prove to be beneficial for our readers and our role as a good database. I'd move for it to be removed but in a manner that can be agreed upon by all involved instead of throwing reverts at each other and arguing. --

Retrieved from "https://fallout.fandom.com/wiki/Talk:Flare_gun_(Lonesome_Road)?oldid=1941890"
Community content is available under CC-BY-SA unless otherwise noted.