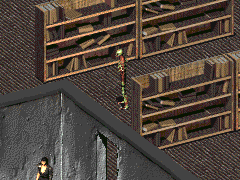 Vault 13 (formerly)
Followers of the Apocalypse

“Though I am different in appearance, I have much knowledge to impart upon those who will listen.”

Talius is an FEV mutant who resides in the basement of the library of the Followers of the Apocalypse.

Talius was a vault dweller from Vault 13, sent out by the overseer to find the water chip. Together with Ed, this means there are two confirmed vault dwellers from Vault 13 who were sent out before the Vault Dweller. Supplied with a shotgun and some 12 gauge shells, Talius searched unsuccessfully for the water chip for some time before hearing of Necropolis' water pump. Presumably hoping that the pump's source was, in fact, a functioning water chip, he traveled to the city not having known of its newly garrisoned detachment of super mutants.

With the help of the ghoul leader Set, he was able to kill some of the mutants before being knocked unconscious by nightkin and promptly taken to the Mariposa Military Base. He was dipped in the vats, which led to a rare transformation into a ghoul-like mutant similar to Harold, as opposed to the typical super mutant. He was rescued under ambiguous circumstances by the Followers of the Apocalypse, in his words, "from the full effects of the transformation into a heinous beast." He joined as a full-fledged member shortly afterward.

Find Children spy in the Followers: Talius can be accused of being a Children spy. He will refute this and tell the Vault Dweller to look elsewhere for the spy.

Retrieved from "https://fallout.fandom.com/wiki/Talius?oldid=3287034"
Community content is available under CC-BY-SA unless otherwise noted.