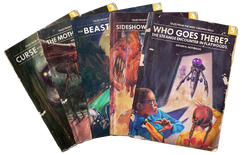 (for 60 minutes with Curator)

“Open your mind to the strange, bizarre, and sometimes terrifying world that exists in the shadows and fringes of our own. Where myth, legend, and rumor are made real.”— tagline

Tales from the West Virginia Hills is a perk magazine and holotape series in Fallout 76.

Tales from the West Virginia Hills is a pre-War magazine series that features stories about different monsters from West Virginian folklore. Each issue comes with two holotapes containing a two-part radio play written by Steven H. Patterson, detailing people who have come into contact with these creatures. Each is set out in a simple formula: the first holotape describes the protagonist(s) being set up to encounter a monster, with the second holotape covering the encounter before ending on a sinister, ominously vague note. The cover art for the magazine depicts the monster of each issue and the would-be victim(s).

Reading an issue of Tales from the West Virginia Hills will temporarily give the player character a damage bonus specific to the "monster" featured in the issue. All bonuses expire after 30 minutes (60 minutes with Curator), and the magazine is consumed once read. Part 1 and 2 of the accompanying holotapes are added to the player character's inventory upon retrieving the magazine, and the holotapes have additional set spawns.

Issues of Tales from the West Virginia Hills are affected by Pannapictagraphist and will emit directional audio when the player character is in range.

#1: Curse of the Wendigo - Wealthy atomic power plant owner Richard Moore's willingness to speed up production past safe limits results in a radiation leak. Although exposed to the energy, he survives but begins showing an insatiable hunger for meat. When his son checks in, he finds his father has devolved into a feral, skeletal creature, who implicitly attacks him out of hunger.

#2: The Mothman Cometh - A young girl named Mary Scarberry awakens in her bedroom, surrounded by her worried family. She describes how she was coaxed by some friends to go climbing the dangerous Fayetteville Railroad Bridge, where they encountered a strange creature like a giant humanoid moth. She recounts it saving them from being hit by an oncoming train. Leaving her to rest, the adults reveal that while it saved Mary, it dismembered her friends and left their bodies in high trees. As they talk, the Mothman suddenly smashes into Mary's room, destroying her nurse robot and abducting her before the adults can arrive to protect her.

#3: The Beast of Grafton - A couple of teens named Robby Cockgril and Peggy Mansfield are run off the road by a hulking headless monster as they speed home from a late-night date. Fleeing into the woods, they stumble across an old hospital and try to take shelter there, only to learn too late that the monster they saw is one of several crafted by the resident doctor from human test subjects; and he has just injected the pair of them with the mutagenic formula.

#4: Sideshow Snallygaster - Two young boys, Billy Harding and Teddy, are attending the Tyler County fair, where they hear a barker advertising a snallygaster on display. Billy's father doesn't believe the story or even Teddy's claim he heard from some of the carnies that it escaped, and he heads home, leaving the boys behind. Heading into the sideshow, they find the snallygaster is real and has killed at least one carnival goer already. They are saved by the carnival barker... who then ominously notes that he can't afford the bad publicity if the boys reveal he let his monster kill somebody, so he implicitly feeds the two of them to the snallygaster before packing up the carnival and moving on.

#5: Who Goes There? The Strange Encounter in Flatwoods - A young Pioneer Scout named Fred Fisher awakens in a strange, dark place with a girl named Sally. He describes being lured to an old mine shaft by strange lights in the sky, whereupon he blacked out. Sally describes their "hosts" as beings who like to play strange games involving needles. A door suddenly opens, and in the light, Fred sees that Sally (who has begun a monotonous chant of "Time to play") has some kind of weird helmet seemingly screwed to her head and that their captors aren't human. The production finishes with the narrator claiming that Fred was found by the Flatwoods river several days later, unharmed but disorientated and with two small wounds on each temple. He still searches for Sally.

The benefit description of issue #5 refers to the "Flatwoods Alien" instead of the more consistent term "Flatwoods Monster."

It is ambiguous how the events of the stories in this holotape series correlate to the "real" cryptids that the player character encounters in the game, if at all. While all five cryptid types discussed in the tales (wendigo, mothman, Grafton monster, snallygaster, and Flatwoods monster) can be encountered in Appalachia, the timeline between the airing of the radio dramas and the emergence of the Grafton monster and the snallygaster, in particular, does not match with their established lore as being FEV mutants from the West-Tek research center near Huntersville. The radio dramas are, in-universe, pure fiction, and any accuracies or similarities to the truth (the Beast of Grafton radio drama story is prescient of the Grafton monster's actual creation history) are a result of pure coincidence.

#5 "Who Goes There? The Strange Encounter in Flatwoods"

#1 "Curse of the Wendigo" with reverse blurb
Add an image to this gallery
Retrieved from "https://fallout.fandom.com/wiki/Tales_from_the_West_Virginia_Hills?oldid=3300156"
Community content is available under CC-BY-SA unless otherwise noted.