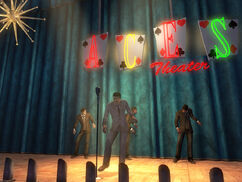 Tommy Torini is looking for new talent for The Aces

“My card - pass it on if you see any good acts out there.”— Tommy Torini

Talent Pool is a side quest in Fallout: New Vegas. The quest begins with Tommy Torini asking the Courier to gather some new talent for the Tops.

Recruit these characters one by one and return to Tommy Torini after each recruitment:

“There's not much of a backstory to Streets of New Reno. We needed a small number of songs for the performers at the Tops after Talent Pool was completed but we hadn’t actually decided on/licensed anything. We realized this fairly late on the project and didn’t have many options, so I suggested writing variants of folk songs to be performed with James Melilli and Nathaniel Chapman on guitar. That’s what we would up doing, later adding a variant of Cobwebs and Rainbows to a low-cost instrumental track we found somewhere.”— Joshua Sawyer's tumblr

He also elaborated on the writing process:

“Hey I recently beat Fallout: New Vegas and i saw u wrote some songs in the game in the ending credits. and i was wondering what it was like making those songs and also how it was like being a lead designer on one of the best games ever made?!
Joshua Sawyer: We had to make the songs pretty quickly toward the end of the project. For the guitar songs, the guitarists (Nathaniel Chapman and James Melilli) had to learn the pieces in an hour or two. There wasn't any time to transpose anything, so I had to sing the songs in whatever key we had guitar tabs for. For side content, I think they turned out pretty well.”— Joshua Sawyer

Tommy and his Rad Pack Revue

Board with all announcements

Benny and Swank discussing Tommy Torini's search for talent, as depicted in All Roads
Add a photo to this gallery