Takoma Park is a small shopping center in the Capital Wasteland in 2277.

The pre-War office park, adjacent to a metro station, a bank, and the Nifty Thrifty pawnshop. The streets are lined with brownstone style townhouses to the south and high rise apartment buildings to the north. It also provides the only access point to Takoma Industrial, reached through the Vernon East/Takoma Park subway tunnels from the Vernon Square East station. The area provides direct access to Takoma Industrial at the north end of the map, through a derelict home (D).

The area is rife with super mutants as well as super mutant overlords with Broken Steel. It is possible to be attacked by Talon Company either at the derelict home or at Takoma Industrial. A super mutant behemoth can be found here near the auto shop. An artillery strike can be triggered by a switch on top of a trailer next to the water tower (C) that can be helpful fighting the behemoth. The artillery strike will have a short cooldown after use.

Heading east past Nifty Thrifty and up the hill towards point (D) there is a junction bearing off to the right past a Pulowski Preservation shelter, inside the shelter, there is an ammunition box. Past this, a semi-trailer lies upon a mound of rubble which blocks this road. In the trailer are three ammunition boxes and two stimpaks. Shortly past this junction, towards point (D), there is a mini-camp from which the second wave of super mutants attacks. In the camp, there are two ammunition boxes containing up to four missiles. One of the boxes has an Average lock. Two first aid boxes contain a blood pack, two bobby pins, Rad-X, purified water and two stimpaks. There is also a bed that can be used.

Isabella Proud's camp can be found behind Takoma Industrial (A). The only way to access this area is by entering the factory, going up the stairs that are capped by a wooden plank with a skeleton and barrel on it which leads to a door that exits to the roof. Go down the stairs to the path that runs next to the irradiated canal, and cross the canal via the pipes sticking down into the water (one has a ramp), or via the downed antenna tower. Once on the northern side of the canal, go north through the gap between the buildings north of the tent. After reading through Isabella's computer, her alpha male research subject "Samuel" will attack from behind. Near Isabella Proud's camp there is an alleyway where, if one jumps over some concrete barriers, they can find a Chinese assault rifle two ammunition boxes, a few beers, Pork n' Beans, and RadAway. A skeleton and a campfire (not lit, made out of a tire) can also be found.

Takoma Park appears only in Fallout 3. 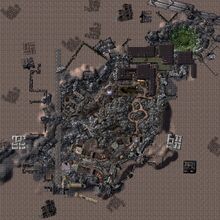