Feral ghouls
Outside:
Super mutant behemoth (to the southwest)

Takoma Industrial is an abandoned factory in Takoma Park in Washington, D.C. in 2277.

It is a large complex that once manufactured Abraxo cleaner. In the years since the Great War, Takoma Industrial has become a stronghold for super mutants.

Behind the factory, through the back door, there is a massive bomb crater right up against the side of the building. In this crater, one may find Isabella Proud, a scientist who was researching the behavior of feral ghouls, which is explained on her terminal.

Takoma Industrial is a rather isolated and dangerous location to find in the D.C. ruins, requiring the Lone Wanderer to travel quite a bit out of their way on foot from Vernon Square. The industrial area can only be reached by traveling through the Vernon East/Takoma Park metro to Takoma Park. Where, after traveling Takoma Park's length east uphill then north to the end of the street, the player character must pass through a derelict house and then downhill to the west.

Upon arrival, a battle will be occurring between a squad of Talon Company mercs and some super mutants right outside the facility entrance. If one returns to this location after defeating the behemoth, two additional mercs, another super mutant, and a level-dependent robot will be spawned.

Two of the exits lead to locations that are otherwise inaccessible. The elevated door in the north wall leads to the factory's "backyard," which has a tent with beds and several lootable boxes, as well as a hidden way to Isabella Proud's camp; the elevated door in the east wall of the southern section of the factory leads to a balcony with a sniper rifle and several .308 rounds.

To the southwest outside of the compound, through a closed gate, there is a super mutant behemoth with three other super mutants outside an auto shop. Just after opening the gate, there is a set of planks leading up onto the roof of a truck, where the body of a dead mercenary lies. On his corpse one will find the artillery note, explaining Talon Company is operating in the area and that they were hired to help the group raid Takoma to take back their old positions

The artillery switch next to the merc's corpse can aid in taking down the behemoth. After 5-6 launches, the switch will break, and the Lone Wanderer will be prompted to attempt to fix the switch. A 33 or higher Science skill will enable them to repair the switch, after which it will not break again, allowing unlimited bombardment of the behemoth.

Takoma Industrial appears only in Fallout 3. 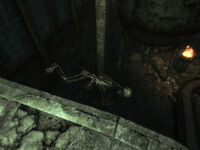 The behemoth targeted with mini nukes