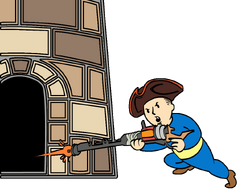 350+ XP
The Castle as a settlement

“Oh, hell! General, are you seeing this thing? Everybody, concentrate your fire on the queen!”— Preston Garvey

Taking Independence is a Minutemen main quest and achievement/trophy in Fallout 4.

At this point, the Sole Survivor must head to the Castle and meet Preston there. Preston will be waiting with a strike team of three Minutemen. As the Sole Survivor approaches, Preston will talk a little about the fort before asking the Sole Survivor to decide on a strike plan. The three Minutemen will offer various potential plans of attack: a direct assault into the courtyard via the breached northwest wall, a pincer through the breach and the main gate to the south, or setting up a firing line outside the northwest breach and drawing the mirelurks out to their guns.

From here the Sole Survivor must find the marked mirelurk nests in and around the Castle's walls and destroy all of the eggs. As they clear them out, more eggs will hatch and more mirelurks will emerge. When enough of the eggs are desroyed, the entire fort will shake, and a mirelurk queen will emerge from the lagoon - the "sea monster" that destroyed the Castle in the past. She'll make her way through the southwest breach and into the Castle courtyard and begin attacking everything in sight. A missile launcher and a flamer can be found in an armory inside the east corner of the Castle's wall, and may come in handy for defeating the queen.

Once the queen has been killed and the remaining eggs cleared out, Preston and the remaining Minutemen will gather in the courtyard. Preston will tell the remaining Minutemen to be alert for any remaining mirelurks while he and the Sole Survivor have a look at the radio transmitter in the center of the courtyard. To finish the quest, the Sole Survivor must use the castle's workshop to power up the radio transmitter. The transmitter requires 10 units of power, or a single large generator. With the transmitter powered up, Preston will express his happiness at the success of the mission as the quest completes.

Approximately three days after the Castle is taken, Ronnie Shaw will arrive and the Minutemen questline continues with Old Guns.

This quest's name is a reference to the original name of the location, Fort Independence.

Retrieved from "https://fallout.fandom.com/wiki/Taking_Independence?oldid=3431145"
Community content is available under CC-BY-SA unless otherwise noted.
... more about "Taking Independence"
RDF feed
Has platform
PC +, Playstation 4 +  and Xbox One +