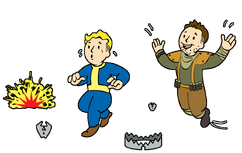 Complete Taken for a Ride

Taken for a Ride is a main quest and achievement/trophy in the Fallout 4 add-on Nuka-World.

Arriving at the Nuka-station, RedEye will announce over the intercom that there is "fresh meat" to run the gauntlet.

The first room in the Gauntlet is filled with a range of machinegun and laser turrets. After dealing with or running through, the next room is filled with tripwire traps. These can be avoided by picking a Master lock to the left, but otherwise disarming them works as well. Heading up the stairs leads to a selection of three doors.

The rightmost door has a grenade bouquet that drops on opening, and the middle one has a Jangles cymbal toy sitting on a gruesome display. The left door has a passage behind it. The next room is filled with radiation barrels. There is an alcove in the southwestern corner of the room, where a rusty key can be picked up from a shelf to unlock the next Expert-locked door with. Heading down leads to the Nuka-World access tunnels.

This room has ten turrets that will be activated by the Jangles cymbal toy. Destroying it will prevent the turrets activating, and will earn a disparaging comment from RedEye. Alternatively, they can be deactivated by a terminal.

The next room contains rad-rats in a cage and an animatronic alien turret. Following on from here is a tunnel filled with frag-mine trapped vehicles, leading to a mirelurk nest room. The door on the other side of the fragile plank walkway is Expert-locked, and if picked, RedEye will react in surprise. Otherwise, dropping down and running up the small tunnel will be required. The next door opens into a hallway packed with explosive traps.

When exiting the hallway into the next room, the maglock door will close and gas will begin spraying out from the ceiling. The gas will gradually damage the Sole Survivor unless they are wearing a hazmat suit. Sections of the room will also spawn radroaches, including at least one legendary radroach, which upon its demise, will spawn a small swarm of smaller radroaches. Using the terminal to open the security gates will shut off the gas. The "utility substation password" holotape for the terminal is on a desk in the room on the right as one enters the area. The key for the door containing the terminal is in a door handle in a caged section, west of the desk with the holotape.

Emerging through the door reveals ant mounds, and past them, RedEye will encourage the "audience" to participate in attacking the player character.

The final room is the Cola-cars arena, where Overboss Colter will be waiting. Once the Sole Survivor enters the locker room, Gage will talk to them again, telling them to find a Thirst Zapper squirt gun in the lockers. Using it will short out Colter's armor circuits, allowing the Sole Survivor to hit him without a severe damage reduction for a limited time. Removing the fusion core from the reactor in the back room will drop the power by 30%, aiding one's chances of survival. Once he is dead, Gage will proclaim the the Sole Survivor as the new overboss, and explains that there are three raider factions at each other's throats that must be placated, and that the Sole Survivor is the best person for the job.

Retrieved from "https://fallout.fandom.com/wiki/Taken_for_a_Ride?oldid=3462611"
Community content is available under CC-BY-SA unless otherwise noted.