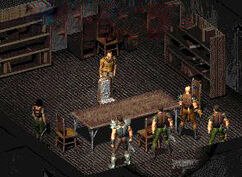 “Excellent! I had already heard from other sources about his plan. You're the final confirmation I needed to take action against him.”— Justin Greene

Take down Decker is an unmarked quest in Fallout.

After taking one (or both) of Decker's quests (Dispose of Jain and/or Dispose of merchant), the Vault Dweller can choose to report Decker's crimes to the Hub police. Sheriff Justin Greene will offer them this unmarked quest if a Charisma check is passed, promising 300 caps up front, and 1000 caps upon completion of the quest.

The Vault Dweller's party (now including Sheriff Greene and Deputy Fry) fast travels to the basement of the Maltese Falcon to confront Decker and his guards.

Retrieved from "https://fallout.fandom.com/wiki/Take_down_Decker?oldid=3268834"
Community content is available under CC-BY-SA unless otherwise noted.