Take Me out to the Ball Game

Take Me out to the Ball Game

15h
“Slugger the Raider is hosting a baseball game, but he forgot to invite you. Time to throw him out at home plate.”

Take Me out to the Ball Game is a single-stage overseer quest in Fallout Shelter.

The first floor has five raiders, stating they are on first base. One of them will yield a rare outfit recipe. The second floor has another five raiders on second base. The third floor has a group of three raiders saying that they're guarding third base, and another three raiders in the right room. The fourth floor has a group of five raiders stating that you've gotten a home run, and are all armed with baseball bats. In the rooms to the left of that is two groups of three raiders. On the fifth floor, in the left room, is Slugger, who is a raider leader accompanied by three raiders. Fighting him is optional, the second dialogue option is the peaceful one. Either way, you are given a sports fan outfit, just like the one he is wearing. There is also a random rare junk and random common weapon, as well as 250 caps in the room. To the right of that room are three more raiders. The top floor has four raiders in the left room.

This quest's name is a reference to the famous 1908 American baseball song "Take Me Out to the Ball Game" by Jack Norworth and Albert Von Tilzer. 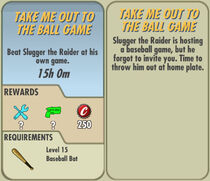