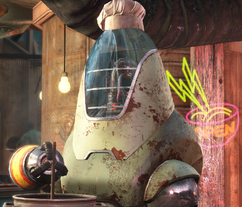 Takahashi is the protectron proprietor of Power Noodles in Diamond City in 2287.

An unusual robotic chef, Takahashi has been operating Power Noodles at the center of Diamond City's market for fifteen years.[1] He continuously stirs an unspecified substance in a stockpot. Takahashi is only able to say one thing, and according to a terminal in Mayor McDonough's office, this appears to be a malfunction. However, McDonough refuses to repair the robot because he believes it is a symbol of Diamond City's culture.

Before his time in Diamond City, Takahashi was just a normal protectron before somebody tampered with the robot's voice module and modified him to speak his single iconic line that is his only greeting and response.

Several companions will interact with Takahashi in a small scene.

Takahashi appears only in Fallout 4.

Retrieved from "https://fallout.fandom.com/wiki/Takahashi?oldid=3475383"
Community content is available under CC-BY-SA unless otherwise noted.