Taiwan was an island off the coast of China, located within Asia.

Sometime shortly after the Predictive Analytic Machine's activation in 2067, the Taiwan Strait region was destabilized as a result of the Pascale Incident. Using early iterations of P.A.M.'s code predicted the best methods for stabilization, which were employed and worked well.[1]

According to Fallout 76 concept art of the Communist power armor, an inscription on the power armor read that "Taiwan must be liberated" by the People's Republic of China.[Non-game 1]

Taiwan is mentioned in Fallout 4 and Fallout 76 concept art. 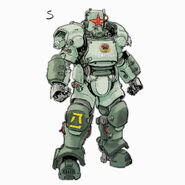