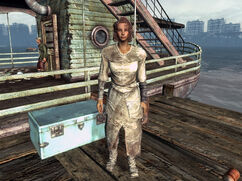 Tailing the Tomboy is an unmarked quest in the Fallout 3 add-on Point Lookout.

When arriving at the Riverboat Landing for the first time, the Lone Wanderer is approached by a woman named Catherine. She is looking for someone to find her daughter Nadine, who has recently left with Tobar for Point Lookout, and convince her to come back.

Nadine can be found inside the Ark & Dove cathedral once the quest Walking with Spirits is completed. She is now a member of the local tribe but not all that thrilled by it. She tells the player character about someone cutting portions of the contestants' brains out during the ritual. She wants to meet up with the player character at Point Lookout Pier once she has confirmed her suspicions regarding who that might be.

When the player character meets her there, she reveals that Tobar is the one who is collecting brain portions and that she will take the Duchess Gambit as compensation for what he has done. Now she agrees to meet her mother back in the Capital Wasteland and the player character is no longer charged for using the ship.

After the conversation, Tobar can be found in the engine room of the Duchess Gambit. After a short conversation, he turns hostile. After he is killed, his body has some bottle caps, the Grifter's Fit, a roving trader hat, .44 Magnum rounds, a scoped .44 Magnum and other items. You can also find the portion of your brain he removed nearby on a table. This fight is optional, however, as one can just leave Tobar trapped in the engine room.

Once the player character travels with Nadine to the Capital Wasteland, Catherine rewards them with some refined punga fruits and 300 caps.

It's possible for Catherine to "disappear" when you return to the Capital Wasteland. This is likely to happen if Catherine is fleeing when you leave the first time causing her to "flee" out into the surrounding wastes making the quest near impossible to complete. [verified]

Retrieved from "https://fallout.fandom.com/wiki/Tailing_the_Tomboy?oldid=3372837"
Community content is available under CC-BY-SA unless otherwise noted.