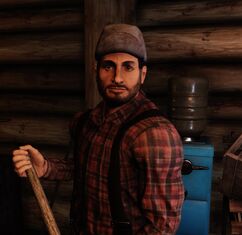 Tad Chance is a member of the Settlers in Appalachia in 2103.

Tad Chance is one of the Settlers in charge of keeping stock of the supply room along with his wife, Gloria. However, they both have recently gotten their hands on stolen Brotherhood of Steel weapons.[1] Tad purchased the weapons at a good price from "a guy, who knows a guy" who declined to mention where he got them from.[2] When pressed, he acknowledges his group isn't disciplined, though Tad himself is wary of training, as he hates doing push-ups.[3]

Supplying Demands: Tad unknowingly purchased stolen Brotherhood weapons, and must be convinced to give them up after retrieving them from Kerwood Mine.

Tad Chance appears only in Fallout 76, introduced in the Steel Dawn update.

Retrieved from "https://fallout.fandom.com/wiki/Tad_Chance?oldid=3444557"
Community content is available under CC-BY-SA unless otherwise noted.