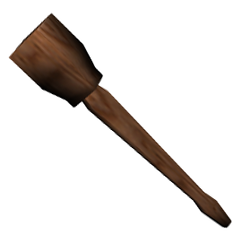 A table leg is a weapon that was to appear in Van Buren, the canceled Fallout 3 by Black Isle Studios. It also appears in the Van Buren tech demo game files.

The table leg is simply a plain wooden leg of a table that has been torn from the top of the table to serve as a makeshift bludgeoning weapon.

While the table leg has a usable AP value, its "attack" mode is Create Character, which appears to have no function.

Retrieved from "https://fallout.fandom.com/wiki/Table_leg?oldid=1721894"
Community content is available under CC-BY-SA unless otherwise noted.