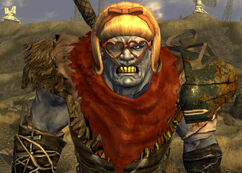 The Unity (formerly)
State of Utobitha

“That's right! I, Tabitha, will take on the burden of your obedience!”

Tabitha, also referred to as "Best Friend Tabitha," is the leader of the State of Utobitha at Black Mountain in 2281.

Tabitha is a former commander of the nightkin of the Unity. Following the fall of the Master, she and her kin wandered the wasteland for over a century. In the course of her travels, she found a Mister Handy designated Rhonda, who became her constant companion and aide. She was responsible for saving several super mutants from suffering at human hands, including Mean Sonofabitch back in New California.[2]

The mutants arrived at Black Mountain around 2275. Although her Stealth Boy-induced dissociative personality disorder was kept stable by Rhonda, the Mister Handy suffered catastrophic damage at Black Mountain and went into hibernation mode.[3] Her state deteriorated over time. Marcus attempted to distract her with a journal project, however, the plan backfired when Tabitha realized the terminal was part of the radio station at Black Mountain and would allow her to broadcast her own words on the airwaves.[4][5] Within a week of fixing the radio and entering the radio business, her personality split into Tabitha and ersatz-Rhonda, convincing the second-generation super mutants she was a prophet.[6] Gentle attempts to coax her out of the radio building failed.[7]

The situation only deteriorated from there. As the nightkin and second-generation mutants clashed with Marcus' fellow first generation super mutants, he found himself unable to broker a peace. Rather than aggravate the conflict, he chose to leave and found another community in 2279.[8][9] This left Tabitha free to implement her utopian project: The State of Utobitha, complete with its own radio station, broadcasting a rather peculiar (insane and rambling) radio message throughout the wasteland, once the radio transmitter that Marcus smashed on his way out was repaired.[10] Raul Tejada was instrumental in restoring the radio. The ghoul mechanic from Mexico was captured by the nightkin and used as a slave to repair anything and everything around the complex, under the constant threat of execution. Of course, it was always delayed by 24 hours in order to have him fix up whatever was broken at the time.[11][12][13]

With Black Mountain Radio on the air again, Tabitha began broadcasting to the ears of anyone with a radio and started a 24/7 broadcast of anti-human propaganda. Unsurprisingly, this has fully worked against Tabitha's best efforts, and it is now common opinion among Mojave wastelanders that static would be better listening than Black Mountain's current block of programming.[14] Thankfully, Raul's repairs couldn't fix Black Mountain Radio’s former broadcast range, and thus it could be only broadcast to the immediate surrounding area of the Mojave Wasteland.[15]

Crazy, Crazy, Crazy: The Courier has to deal with Tabitha and her super mutants by either killing her or persuading her to stop.

According to Mikey Dowling, before recording dialogue for Tabitha and Ronda, voice actor Fred Tatasciore silently read through the entire script once before declaring that he was ready. He then read the script from top to bottom, "effortlessly" flowing in and out of both characters, making it one of Obsidian's favorite recording sessions.[17]

Retrieved from "https://fallout.fandom.com/wiki/Tabitha?oldid=3360387"
Community content is available under CC-BY-SA unless otherwise noted.
... more about "Tabitha"
RDF feed
Has platform
Xbox One +