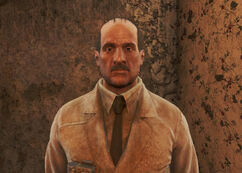 T.S. Wallace is a human male living in the Commonwealth in 2287. Gifted with an exceptional intellect, Wallace is being observed by the Institute for possible recruitment.

A self-taught engineer and scientist, Wallace has spent years studying whatever pre-War technology he could find, as well as the effects of radiation and chems on human biology. The exceptionally intelligent Wallace somehow came to the attention of the Institute and they began observing him as a possible asset. According to Enrico Thompson of the Advanced Systems division, they even began to surreptitiously provide Wallace with scientific information.

Once it became clear that Wallace would make an excellent addition to the Institute, Dr. Thompson and two synths were dispatched to recruit Wallace. The situation became complicated when members of the Minutemen arrived to prevent Wallace's "abduction" by the Institute after seeing his signal flare. When siding with the Institute in the quest Pinned, the Sole Survivor is tasked with handling the Minutemen and convincing Wallace to join the Institute. If the Minutemen have not been reformed, Wallace will instead hire Gunners to protect him.

T.S. Wallace appears only in Fallout 4.

Retrieved from "https://fallout.fandom.com/wiki/T.S._Wallace?oldid=3295781"
Community content is available under CC-BY-SA unless otherwise noted.