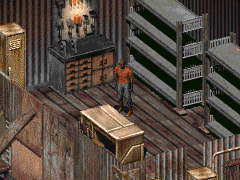 “You see a good-looking black man...er, no, wait. You see T-Ray.”— In-game description

T-Ray is a heavily muscled black man with thick glasses, a light beard, and an attitude.[1] He serves as the leader of a small band of mechanics working for Mr. Bishop in New Reno.

T-Ray appears only in Fallout 2.

Retrieved from "https://fallout.fandom.com/wiki/T-Ray_(character)?oldid=3106549"
Community content is available under CC-BY-SA unless otherwise noted.