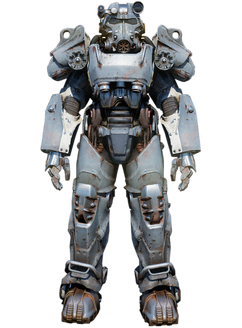 All stats based off of T-60 model

This section is transcluded from Power armor. To change it, please edit the transcluded page.

The T-60 series of powered combat infantry armor entered service after the conclusion of the Battle of Anchorage, mere months before the nuclear apocalypse. The T-60 was rapidly deployed and extensively used by the U.S. Army in all theaters. Deployments of military units in T-60 power armor included the domestic front, enforcing order in the nation.[1] By the Great War it was considered to be the most advanced model of power armor to see extensive use.[2]

As with other power armor models, the T-60 is designed for a single operator. Compared to the T-45, the T-60 is much more heavily armored, although it lacks the sophisticated armor pattern of the T-51. The end result is an extremely protective armor system, though protection comes at the expense of agility and a reduction in battlefield awareness, as the additional power pack armor plating reduces rear visibility together with the oversized pauldrons. As usual for T-series power armor, the helmet completes the ensemble and includes an air filtration system, a bullet-proof vision slit, an electric lamp, and external ports that allow the operator to listen to his surroundings and double as attachments points for extensions. The standard upgrade is a drop-down ocular.[3]

Any shortcomings of the T-60 were compensated for through deployment: a T-60 power armor unit was usually deployed with support from light infantry units, equipped with energy weapons.[4] After the Great War, T-60 power armor became a rare sight until the reformed Brotherhood of Steel under Elder Arthur Maxson recovered a substantial number of these suits (or T-45 conversion packs) and adopted the T-60 as the service uniform of its soldiers.[5]

The T-60 power armor is intended to be a suit designed for use in heavily irradiated zones, offering top of the line radiation protection that's second only to the X-01. Its ballistic protection lags behind X-01's by less than 10% (and is dwarfed by the unique Ultracite power armor, but that's a special, high-maintenance suit for most purposes), and is outclassed by the X-01 in terms of energy protection (but is comparable to Ultracite, differing by just 9 points).

However, the T-60 offers only a little over 10% more ballistic and energy protection than the T-51, while being more expensive to maintain. As such, the T-51 is the optimal choice for regular usage, even if its radiation protection is less than half that of the T-60.

The base level that T-60 pieces can be used at is 40. This armor set is a great all-around power armor that is very easy to repair, since it only requires aluminum, circuitry, plastic and steel; no screws or springs are required.

Furthermore, the player can collect Brotherhood rank paints for their set of T-60. Numbered from BOS I-VII, each is a potential quest reward for completing Forbidden Knowledge. You can only obtain a paint after the prior one has been learned. As of now, Initiate paint can no longer drop from Forbidden Knowledge. Note that the BOS IV paint will drop before BOS III, however, learning it will not effect any future paint rewards. 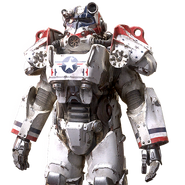 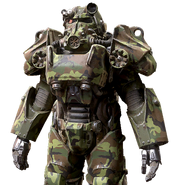 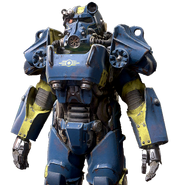 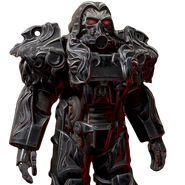 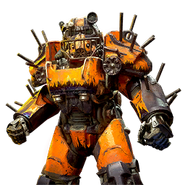 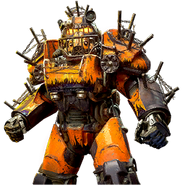 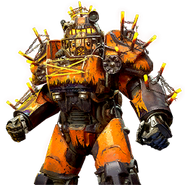 Inferno M.K. III paint
Add an image to this gallery

Retrieved from "https://fallout.fandom.com/wiki/T-60_power_armor_(Fallout_76)?oldid=3103606"
Community content is available under CC-BY-SA unless otherwise noted.