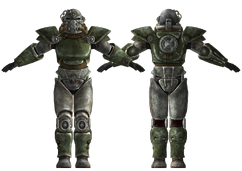 T-51b powered armor is a later form of power armor and represented the peak of armored infantry technology before the Great War. In Fallout 3, the T-51b power armor is a unique model of armor and can only be found in Fort Constantine.

The T-51b power armor provides 50 Damage Resistance and increases Radiation Resistance by 25. Wearing the helmet will provide an additional 10 DR, 8 RR, and provide +1 bonus to Charisma. The armor set cannot be repaired with other armors and must be taken to a vendor for repairs. This armor is tied with the Enclave Hellfire armor as having the best DR in the game.

The T-51b armor is in Fort Constantine, sealed in a room that requires three keys from different locations.

The first key needed is Ted Strayer's special key. Ted Strayer is located in Rivet City. There are four ways to get the key from him: paying him in caps, passing a hard Speech check and convincing him, pickpocketing the key from him, or threatening him (requires 6+ Strength or the Toughness perk).

The second key can be obtained from Dukov, located at Dukov's Place, which is a hotel building. There are numerous ways to obtain Dukov's key. Buying the key from him is one simple way. Another easy way to obtain his key is to convince him with the Black Widow perk if the Lone Wanderer is female. Alternatively, Fantasia, one of Dukov's girls, can be convinced with the Lady Killer perk if the player character is male. If the player character has a high Speech skill and convinces Cherry, Dukov's second female friend, to be brought to Rivet City, she will give up the key to the Lone Wanderer. Dukov can also be intimidated by them with a high Speech skill in order to obtain the key.

The last key can be obtained from Dave, who can be found in his own settlement, the Republic of Dave. The Lone Wanderer can earn his trust with a Speech check, earning the name "Wasteland Ambassador" from Dave and presenting the key as a gift. There is also another Speech check with him if the player character fails to be the wasteland's ambassador. If lacking a high Speech skill, they can kill him and loot the key from his corpse (gives negative Karma).

The power armor will be located in Fort Constantine's basement, behind three different doors. The first door requires Ted Strayer's key, which opens the fort's launch control bunker. The second door, which requires Dukov's key, opens the bomb storage. The last door, with Tara Fields' corpse nearby, opens the room to the power armor with Dave's key. 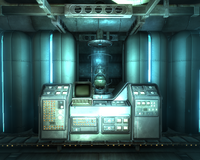 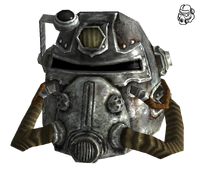 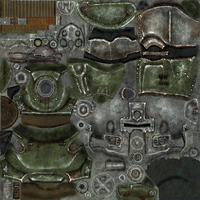