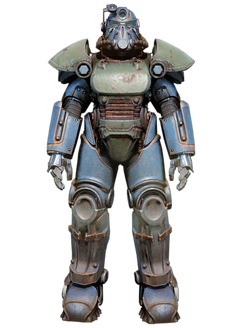 The T-51[1] was widely considered the apex of pre-War powered combat infantry development. Developed over a decade of war by West Tek, it incorporates many of the lessons gleaned from the T-45 power armor service history. Unlike its predecessor, the T-51 benefits from a long development cycle and uses custom-made components to create not a stop-gap model, but armor that provides the best possible protection through incorporating the latest passive defense features.[2][3][4] The resulting perfect balance of performance, mobility and protection made it a powerful asset for United States soldiers on the frontlines.[Non-game 1]

Like the T-45, it is designed for a single human operator, patterned after the human silhouette. Unlike its older sibling, the exterior shell is made from a poly-laminate composite capable of absorbing over 2.5 kilojoules of energy without damage. The strength of the material is further enhanced by the organic, rounded profile of the shell, improving the chances of deflecting projectiles and explosions compared to the older steel plating present on the T-45. The shell is coated in a 10-micron silver ablative layer that allows for reflecting laser blasts and radiation emissions without damaging the composite surface directly.[4][5] The surface can be treated in a special chemical process to increase its defensive properties substantially.[Non-game 2] To further enhance protection against direct contact with and contamination by radioactive, biological or chemical substances, the armor can be made airtight, allowing its operator to explore even the most contaminated areas with reasonable safety as long as the armor is not compromised.[6] The helmet is an integral part of this protection, fitted with a rubberized cowl mounted to the chest plate and providing a tight seal. The Courier can claim that the T-series' vision slits are bulletproof,[7] though conversation with Sheena in Appalachia mentions "a helmet with a bullet hole through the visor" being taken as a trophy after a battle with the Brotherhood First Expeditionary Force.[8] Both can potentially be right, as "bulletproof" is usually a misnomer, as a large enough bullet can penetrate conventionally bulletproof glass that is immune to smaller caliber bullets. Compared to its predecessor, the helmet is smaller and more durable, made out of a single piece of composite, with an easily removable vision assembly. As with the T-45, the ear ports double as accessory mounting points, with a drop-down aiming ocular being standard on all T-51 suits. A forehead-mounted lamp is provided for convenience.

The T-51's ace in the hole is the hydraulics system integrated into the West Tek power armor frame.[9] Powered by a back-mounted TX-28 microfusion pack generating 60,000 watts, the HiFlo hydraulics integrated into the frame of the suit allow it to carry the bulk of the suit and allow the soldier to carry heavy weapons into combat. Due to the design of the T-51, it's much more nimble and agile than the T-45.[4] However, to achieve optimal performance, the armor has to be custom-fitted to each operator.[Non-game 2] A properly fitted armor worn by a well-trained operator feels like an extension of one's body.[10] Comfort is imperative to success in combat operations, aided by the power armor's ability to recycle urine into perfectly drinkable water, allowing the operator to survive for weeks in power armor.[11][2]

The T-51b is a major upgrade over all of its fellow power armors, in all areas. With the exception of T-65, it has the highest damage resistances of any suit, but with the lowest radiation protection. This hardly matters, however: a full set of power armor derives almost all of its radiation protection from the fact that it blocks 90% of environmental radiation in addition to its basic radiation resistance values. It's an excellent all-around power armor for all intents and purposes, well-rounded in all aspects.

Retrieved from "https://fallout.fandom.com/wiki/T-51_power_armor_(Fallout_76)?oldid=3474859"
Community content is available under CC-BY-SA unless otherwise noted.