T-51 powered combat infantry armor[1][2] is the most advanced operational power armor type developed before the Great War by West Tek on contract from the United States government. It provided a balance of performance, protection and mobility to United States troops, decisively shfting the balance of power in the Sino-American War.[Non-game 1]

The successful deployment of the first operational power armor in 2067, designated T-45, changed the nature of modern warfare and played a key role in stabilizing the frontline in Alaska.[3][4][Non-game 2] West-Tek started development on an improved model of power armor immediately and by 2069, it was the single largest defense contract for the company.[5]

In 2074, following the invasion of mainland China, the aging T-45 model proved insufficient, and power armor units, infantry and mechanized divisions became bogged down in fighting.[Non-game 3] The development of a replacement continued, with various production models tested in combat conditions at Fort Strong in Massachusetts, troubleshooting the design. A prototype tested in September 2075 had the desired mobility and protection but were far from stable and soldiers tended to tip over on hard landings. Gyroscopic stabilizers and shock absorbers were subsequently added.[6] Pressure increased on development and by February 2076, the Pentagon demanded that turnaround times be cut in half, due to intensifying combat operations overseas. Despite the dangers, Fort Strong development teams complied.[7]

The intensified effort paid off and culminated in the first production run of T-51 power armor being sent to China in June 2076. It outperformed the T-45 in every aspect, providing the United States with the means to overcome Chinese resistance on all fronts, to the point where Chinese troops would surrender upon spotting a T-51 contingent.[8][Non-game 4] The renewed American offensive finally sent the People's Liberation Army into retreat. In January 2077, General Constantine Chase completed the Anchorage Reclamation, using troops fielding winterized T-51b power armor as spearhead to minimize causalities.[9][10] The Chinese war effort buckled and their supply routes broke down completely, with sweeping attacks by power armor units armed with the T-51 playing a crucial role.[Non-game 5][Non-game 4] In addition to the war against the Chinese, units in T-51 were also deployed to quell attacks by Canadian freedom fighters who were resisting the US annexation of Canada,[11] and from January 22, 2077, onwards, to break protests on the homefront, particularly the food riots.[Non-game 6]

Although recognized as the pinnacle of mechanized protection and associated with the battle of Anchorage,[12] the T-51 was bolstered by the deployment of T-60 power armor after Anchorage,[13] and the two were a common sight in all US military engagements by October 2077.[14]

After the Great War, the T-51 continued to serve with distinction with various wasteland factions. Its principal operator is the Brotherhood of Steel, with Brotherhood T-51b armor being commonly associated with the Brotherhood in New California.[15] Its use proliferated and by mid-23rd century it was used by a number of mercenary groups.[16] It was also the service armor of the Enclave until the deployment of advanced power armor of its own design in the early 23rd century, at which point the T-51 was relegated to training and logistical duties.[17]

The T-51[1] was widely considered the apex of pre-War powered combat infantry development. Developed over a decade of war by West Tek, it incorporates many of the lessons gleaned from the T-45 power armor service history. Unlike its predecessor, the T-51 benefits from a long development cycle and uses custom-made components to create not a stop-gap model, but armor that provides the best possible protection through incorporating the latest passive defense features.[18][5][2] The resulting perfect balance of performance, mobility and protection made it a powerful asset for United States soldiers on the frontlines.[Non-game 1]

Like the T-45, it is designed for a single human operator, patterned after the human silhouette. Unlike its older sibling, the exterior shell is made from a poly-laminate composite capable of absorbing over 2.5 kilojoules of energy without damage. The strength of the material is further enhanced by the organic, rounded profile of the shell, improving the chances of deflecting projectiles and explosions compared to the older steel plating present on the T-45. The shell is coated in a 10-micron silver ablative layer that allows for reflecting laser blasts and radiation emissions without damaging the composite surface directly.[2][19] The surface can be treated in a special chemical process to increase its defensive properties substantially.[Non-game 7] To further enhance protection against direct contact with and contamination by radioactive, biological or chemical substances, the armor can be made airtight, allowing its operator to explore even the most contaminated areas with reasonable safety as long as the armor is not compromised.[20] The helmet is an integral part of this protection, fitted with a rubberized cowl mounted to the chest plate and providing a tight seal. The Courier can claim that the T-series' vision slits are bulletproof,[21] though conversation with Sheena in Appalachia mentions "a helmet with a bullet hole through the visor" being taken as a trophy after a battle with the Brotherhood First Expeditionary Force.[22] Both can potentially be right, as "bulletproof" is usually a misnomer, as a large enough bullet can penetrate conventionally bulletproof glass that is immune to smaller caliber bullets. Compared to its predecessor, the helmet is smaller and more durable, made out of a single piece of composite, with an easily removable vision assembly. As with the T-45, the ear ports double as accessory mounting points, with a drop-down aiming ocular being standard on all T-51 suits. A forehead-mounted lamp is provided for convenience.

The T-51's ace in the hole is the hydraulics system integrated into the West Tek power armor frame.[23] Powered by a back-mounted TX-28 microfusion pack generating 60,000 watts, the HiFlo hydraulics integrated into the frame of the suit allow it to carry the bulk of the suit and allow the soldier to carry heavy weapons into combat. Due to the design of the T-51, it's much more nimble and agile than the T-45.[2] However, to achieve optimal performance, the armor has to be custom-fitted to each operator.[Non-game 7] A properly fitted armor worn by a well-trained operator feels like an extension of one's body.[24] Comfort is imperative to success in combat operations, aided by the power armor's ability to recycle urine into perfectly drinkable water, allowing the operator to survive for weeks in power armor.[25][18]

The most ubiquitous model of power armor typically features a solid olive green livery on the breastplate and pauldrons, with the base light gray on the limbs and helmet. It was widely considered the apex of the pre-War power armor design.

A pre-War variant of the T-51b power armor adapted for fighting in Arctic environments. The most noticeable difference is that the armor is painted a pale blue hue to blend in with the snowy environments and bears explicit livery of the United States Army (Army stars on the pauldrons and the national flag below the TX-28 fusion pack. The serial number is also printed on the left side of the chest plate.

A post-War variant of the T-51b, used by the Brotherhood of Steel as its service armor in New California and children chapters of Lost Hills. The olive green coloring of the armor has faded entirely and was replaced with a pale gray color overall. Brotherhood suits are kept in a state of good repair, with the usual streaks of rust and damage found on suits in the wasteland noticeably absent. The Brotherhood sigil is painted on the left pauldron, as per standard practice.

An incomplete civilian model of the power armor under development by Grafton Steel's Project Phoenix. It was intended to not only allow workers to withstand and work under extreme temperatures but also to service machinery without stopping up the whole works. Only the helmet had been successfully produced when the Great War occurred.

A post-war, upgraded variant of the T-51 that uses Ultracite in its design. This variant was developed by both the Brotherhood of Steel's Lost Hills and Appalachia chapters. The upgrades push the T-51's performance far higher than previous versions.

A set of ultracite power armor that has been completely overrun by strangler vines and other flora. When the full set is equipped, the wearer gains the strangler heart set bonus, which adds acid damage to all armed attacks and makes nearby enemies take acid damage.

Rhombus, the head paladin of the Lost Hills Brotherhood of Steel

A paladin of the Brotherhood of Steel

Cabbot, a scribe in training

An early render for Rhombus, note the much smaller opening for the head
Add a photo to this gallery

U.S. soldiers during the Battle of Anchorage in Operation: Anchorage

Winterized T-51b power armor
Add a photo to this gallery

Brotherhood T-51b power armor
Add a photo to this gallery 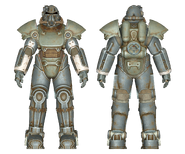 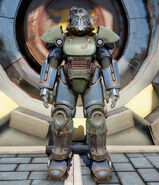 Fallout 76 in-game
Add a photo to this gallery

T-51b power armor
Add a photo to this gallery

Retrieved from "https://fallout.fandom.com/wiki/T-51_power_armor?oldid=3484260"
Community content is available under CC-BY-SA unless otherwise noted.