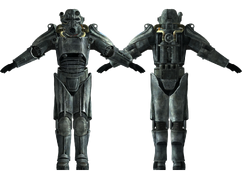 The T-45d power armor is a piece of armor in Fallout: New Vegas.

This section is transcluded from T-45d power armor. To change it, please edit the transcluded page.

Originally developed and manufactured for the United States Army by American defense contractor West Tek,[1] the T-45d power armor was the first version of power armor to be successfully deployed in battle.

In 2067, the first suit of T-45d power armor was deployed in Alaska during the start of the Anchorage Reclamation in the midst of the Sino-American War. This power armor was incredibly effective against Chinese tanks and infantry. Its ability to allow a single infantryman to carry heavy ordnance that otherwise required a team of soldiers to transport and operate became key in various localized conflicts on the Alaskan front, and it allowed American soldiers wearing the armor to destroy entire towns occupied by Chinese troops without endangering themselves.

In 2076, the more advanced T-51b power armor variant was introduced into combat duty.

This section is transcluded from T-45d power armor. To change it, please edit the transcluded page.

The T-45d lacks the mobility of later power armor models (such as the T-51b power armor) because of its less advanced servo design; as a result it limits the wearer's Agility.

The first version of T-45d power armor deployed on the front lines against the Chinese was powered by small energy cells and it burned through them at an alarming rate.

While the T-45d armor is similar in its overall shape to the newer T-51b power armor, it is significantly less advanced than its later counterpart, and uses riveted steel plates instead of plastic composite materials in its construction. Various electronic and mechanical subsystems of the armor are exposed on the outside of its casing rather than sealed within as in the T-51b, making it far more susceptible to damage. In addition, a specialized body suit is required to be worn underneath the T-45d's armored shell in order to facilitate linking the armor's servos to the wearer's own motions and to make the armor more bearable because of its heat dissipation problems.

T-45d power armor provides a Damage Threshold of 22 as well as a bonus of 10% to Radiation Resistance, +2 to Strength and a -2 penalty to Agility. It is not quite as protective as T-51b power armor or its variants, nor is it as protective as Remnants power armor, but it still provides protection and durability superior to every other form of non-powered armor in the base game, the only exception being Desert Ranger combat armor that has the same amount of DT. The Elite riot gear armor also shares the same DT, and is obtained in the Lonesome Road.


Cite error: <ref> tags exist, but no <references/> tag was found
Retrieved from "https://fallout.fandom.com/wiki/T-45d_power_armor_(Fallout:_New_Vegas)?oldid=1681889"
Community content is available under CC-BY-SA unless otherwise noted.