The T-45 series of power armor was built by defense contractor West-Tek and served as the first power armor variant ever utilized by the U.S. military on the battlefield.[1][2] The power armor prototypes were slated to be part of an exhibit at the Museum of Technology in 2078.[3] Harold Frost, one of T-45's original designers, designed the Excavator power armor for the Garrahan Mining Company.[4] Following the Great War, many suits are still found throughout the wastelands, providing those who wear them substantial protection from threats.[2] The armor is utilized by the Brotherhood of Steel, including the Lyons' Brotherhood of Steel and the loyalist Outcasts.

An upgrade of the standard T-45d power armor, using a revised T-47 model. The MP upgrade included an automated delivery system for various medical substances such as stimpaks.[5]

Modified by the Brotherhood Outcasts, the armor has been painted red and black and Outcast symbols have been added. Outcast recon armor is worn independently or as part of a full power armor set. Linden's Outcast power armor is a unique variant.

Unique variant of the standard T-45d found in the Pitt, one set is worn by Ishmael Ashur and another is a prized possession of Everett.[6]

NCR salvaged power armor is T-45d power armor recovered by the NCR during their war with the Brotherhood of Steel.[7] NCR technicians stripped out the joint servos, making it more difficult to use, but has no special training requirement.[7] It has a yellow NCR bear logo painted on the chest plate and red stripes on the arms.

The scorched Sierra power armor is a suit of T-45d power armor that has been modified with a NCR theme, worn by Colonel Royez. 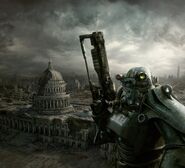 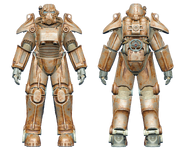 The power armor as it appears in Fallout 4

Power armor card from Fallout Shelter: The Board Game

T-45 from Fallout 4 with Minutemen paint