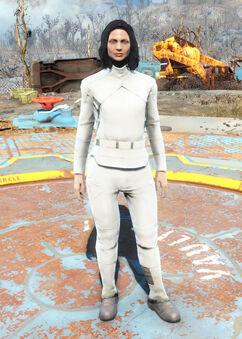 The synth uniform is a piece of clothing in Fallout 4.

The uniform adds +1 Perception when worn. Armor pieces can be equipped over this outfit, but it cannot be modified with ballistic weave.

Retrieved from "https://fallout.fandom.com/wiki/Synth_uniform?oldid=3469876"
Community content is available under CC-BY-SA unless otherwise noted.