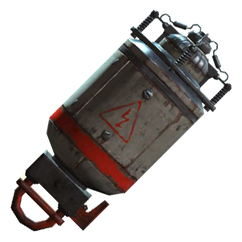 The synth relay grenade is a weapon in Fallout 4.

Tossing a synth relay grenade causes a level 5 generation 1 synth to spawn where it lands, and serve as reinforcement.

Retrieved from "https://fallout.fandom.com/wiki/Synth_relay_grenade?oldid=3345047"
Community content is available under CC-BY-SA unless otherwise noted.