Fallout 3
Fallout 4
“My God, I... I remember. I remember it all. From before. Zimmer. The Commonwealth. The Institute. My God, all those runners I brought down...”— Harkness, after his memory is restored

The Synth Retention Bureau (S.R.B.) is a branch of the Institute tasked with tracking and capturing escaped synths.

After the Institute began creating advanced synthetic humans ("synths") many developed strong personalities and a desire to escape their life of servitude.[1] With the help of Institute synth sympathizers like Liam Binet, and factions like the Railroad, many synths have escaped the Institute, most of them subsequently having their minds wiped and faces reconstructed, allowing them to live lives as normal humans.[2][3]

As a result of the synth escapes, the Institute founded the Synth Retention Bureau, or S.R.B., a branch of the Institute dedicated solely to the recovery and rehabilitation of escaped synths. The Institute scientists developed synths called coursers, designed to track down and reclaim escaped synths.[4] Inside the Institute, the Sole Survivor learns of the tension between the S.R.B and the other divisions (especially Advanced Systems) and that a scientist named William Moseley was employed as a bridge between the two divisions.[5]

Zimmer mentions that Harkness used to work for a "special branch of the Commonwealth Police."[6]

The Synth Retention Bureau appears in Fallout 3 and Fallout 4.

Room for rehabilitating synths, from The Art of Fallout 4 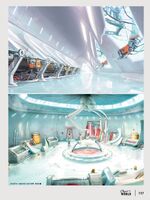 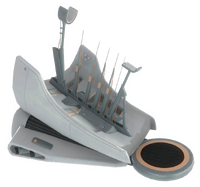