The Sympto-Matic is a world and workshop object in Fallout 76.

The Sympto-Matic was a product similar to that of the popular Auto-Doc line capable of various medical procedures, diagnoses, and medication administration. Created by Med-Tek[1] as a specialized push-button medical device, the device was utilized in the Appalachian region before the Great War.

The device was able to handle a variety of diseases and injuries and, with the assistance of fusion batteries, could sustain power outages and shortages, yet start-up and operate without issue. The Sympto-Matic was utilized in places like Harpers Ferry and the AVR Medical Center.

While initially feared to be capable of taking jobs from medical professionals, as well as having issues with its programming when treating patients, it soon became an asset to doctors across Appalachia and the rollout of the device was recommended to begin immediately, only cut short by the Great War.[2] A Sympto-Matic known as the Neural Oscillation Scanner was present in the cave below Hornwright Industrial Headquarters, used to create a new intelligence module for the Motherlode if it needed to be replaced.

The device has a multiplicity of capabilities at its disposal, such as:[3][4][5]

The constructible Sympto-Matic is solely utilized to cure all current diseases, similar to the disease cure aid item. Machines found in the world cannot be interacted with and thus provide no cure, the exception being Sympto-Matics built by other players.

Vault Boy depiction in An Ounce of Prevention 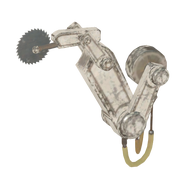 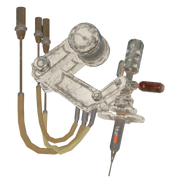 Syringe arm, more needle than ever before 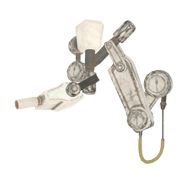