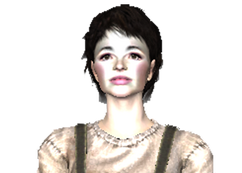 Sylvia was a prostitute that lived in Nipton.

Before Nipton was raided by Caesar's Legion, Sylvia was one of mayor Joseph B. Steyn's prostitutes.

Sylvia was to appear only in Fallout: New Vegas.[1]

Retrieved from "https://fallout.fandom.com/wiki/Sylvia?oldid=3125617"
Community content is available under CC-BY-SA unless otherwise noted.