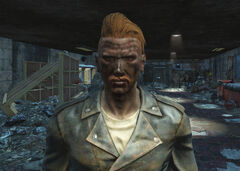 Sykes was previously a raider, cast out by a former comrade named K.C. after Sykes used all of his Jet and subsequently tried to make up for the cost by selling K.C.'s favorite minigun. The gun, nicknamed Fate, was sold for a mere 100 caps. Sykes is found dead at the bottom of the stairs in the Nuka-World monorail station shortly after entering the Gauntlet.

Sykes appears only in the Fallout 4 add-on Nuka-World.

Retrieved from "https://fallout.fandom.com/wiki/Sykes_(Nuka-World)?oldid=3176959"
Community content is available under CC-BY-SA unless otherwise noted.