Bloody Mess
(+0.5)
Ghoul Ecology
(+5)
“Yeah, it is nice. I don't even sleep without it under my pillow. My father made gun ammunition for a living. Taught me everything about how firearms work. So, I've spent my downtime tinkering with guns like my 10mm Ultra SMG here. It's like a hobby I guess.”— Sydney

Sydney's 10mm "Ultra" SMG does 2 extra points of damage per shot and holds 20 more rounds of ammunition in the magazine when compared against the base 10mm SMG, which also allows it to do substantially more damage per second when reloading times are considered.

Sydney's 10mm "Ultra" SMG can fire a total of about 926 rounds, the equivalent of 19 reloads, from full condition before breaking.

Sydney the relic hunter carries this weapon. It can be obtained by either killing her, letting her die during the quest Stealing Independence, or finishing this quest and afterwards giving her "A note from Little Moonbeam's father".

Sydney has two versions of this weapon. According to the GECK, she carries a non-playable version, and a playable version is spawned on her person when she is killed, as a "death item". As a companion, she will use up ammunition for any non-companion weapon, so the non-playable version exists to prevent this. Thus, if she dies and you take her weapon, you may notice that she appears to still be holding it in her hand. 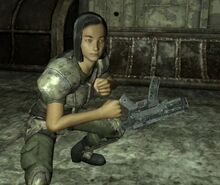